Wow. We got all excited about the first episode and went on talking for a while! We'll try to keep future episodes under an hour. First Anna, Rachel and Jason have a chat about how we ended up in the library classroom and what we think about that. Anna discusses the Cephalonian Method and Rachel talks about Critical Evaluation Family Feud, two active learning activities, and Jason interviews library consultant and author Beth Gallaway about gaming as a teaching tool.

Our awesome logo is by Christian Sager. Check out his webcomic Border Crossings. Skull by Gustopher and book by King Unicorn.

Adventures in Library Instruction is a monthly podcast about teaching information literacy in libraries.

Got comments? Got a topic you'd like to hear us cover? E-mail us at adlibinstruction@gmail.com. 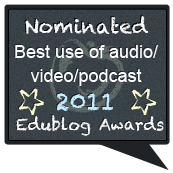